The best is yet to come for Bruce 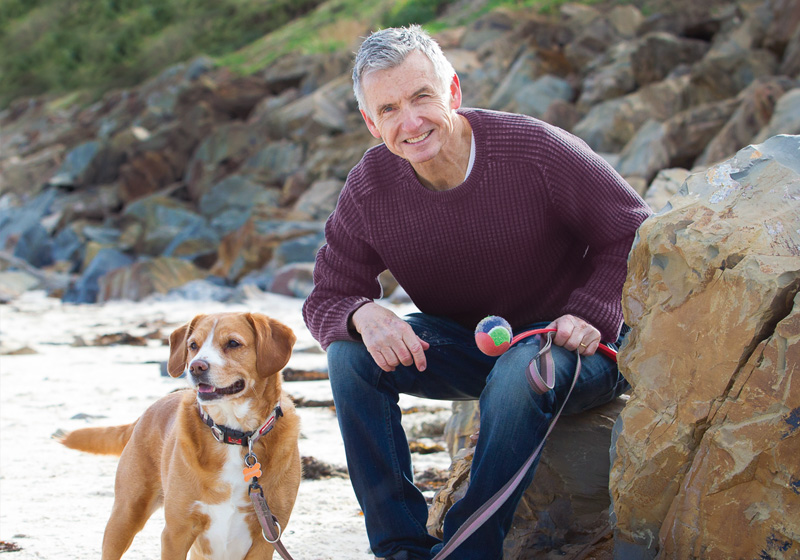 The man dubbed ‘Mr Olympics’ has been a fixture on our screens and airwaves for the last four decades and has called some of the nation’s greatest sporting moments. His was the voice that perfectly summed up Cathy Freeman’s gold medal-winning sprint at the Sydney Olympics with “what a moment, what a legend”. When champion mare Makybe Diva claimed her third straight Melbourne Cup win, he called it “the greatest  victory in the history of the race”.

Despite reaching the top of his game, Bruce always sees room for improvement.

“I don’t think that age should be a handbrake on ambition,” he says. “And by ambition I don’t mean get more money, or a bigger job, I mean do a better job,” he says. “I still feel like I can get better and while some of my biggest events might be behind me, my best work might still be ahead.”

It’s a mindset that continues to drive Bruce in his work and life and helped him carry on in the wake of a diagnosis of chronic lymphocytic leukaemia (CLL) in 2015, revealed to the public last year.

“There was a lot of reaction to the news and that was comforting, but I felt  it was unwarranted because I wasn’t on any treatment and I  didn’t feel ill – I’ve  never felt ill.”

CLL is a slow-growing leukaemia that affects white blood cells, but between 30 and 50 percent of people diagnosed with the disease never require any treatment, apart from check-ups to monitor their health.

The only concession Bruce made to his work schedule was to stop covering tennis, allowing a few weeks’ rest over summer. “What it’s meant for me is the opportunity to regenerate a bit and have a break mentally,” he says. “It’s been a good move; it’s meant I can spend time with my family, but my career has continued on and as far as I’m concerned I’m quite capable of working hard, certainly today and hopefully for a few years in the future.”

Bruce grew up in Adelaide’s north-west in a family of sports lovers and knew from the age of five that he wanted to be a race caller. “Growing up, I wanted to call the  Melbourne Cup, I wanted to play test cricket and I wanted to play league football. In a way, I’ve been practising all my life to do the job  I’m doing now.”

“My Uncle Leslie gave me a  scrapbook of horses, and I used to pore over those, and ask questions about them, have conversations about racing – it was my first love and still is,” he says.

His career began as a 23-year-old in 1976 at Radio 5DN in Adelaide, calling races and hosting a sports show before what he calls a ‘lucky break’ – the chance to present sports  news on Channel 7, and  produce a racing program  (Racetrack).

In 1980 he covered his first Olympics for Channel 7, hosting the Adelaide end of the Moscow telecast. Bruce went on to read sports news for Channel 10 in Melbourne and covered the 1984 Los Angeles Olympics, followed by the Seoul Olympics. Since then, Bruce has covered every summer Olympics, three Winter Games and continues to anchor major sporting events including AFL football grand finals, the Brownlow Medal and the Melbourne Cup, and remains the only sports commentator to be recognised with a Logie Award.

Bruce returned to Adelaide with his wife Anne in 1999 with their kids Sam (then five) and Alexandra (two), to spend time with both their parents and extended families. Today Sam works in the media in Melbourne and Alex lives ‘around the corner’ in  Glenelg  South. “Adelaide’s home for both of us; it’ s a great place to bring up kids and it’s a good place  to be.”

Bruce always makes time to exercise – during the Commonwealth Games coverage he was up jogging in the dark before a 7am start each morning – and tries to eat well. “I enjoy the challenge of staying fit – I’m not about to go out and break a record for a 65-year-old, but I am healthy. I enjoy a drink and being social but I don’t feel right if I don’t do some form of exercise every day. I learnt early on that the fitter and healthier you are, the harder you can work.”

At the time of our interview, Bruce was looking forward to a busy few months covering the AFL and spring racing season, and joining Channel 7 to cover Aussie cricket. He had ticked many boxes in his career, but when it came to retirement, he had changed his mindset. “I used to think I would do as much as I could and then retire – go cold turkey – but I’ve realised that’s not a good idea for me, and probably not a good idea for most people. I’d like to continue on for as long as I can, but perhaps do less, to give myself the opportunity to recharge, prepare and look after myself.”

“The big questions for me ahead are how do I manage and maintain my standards? How do I still get the same buzz, the feel-good factor, when I’m no longer working? That will be the challenge. It’s an interesting time, but  it’s an exciting time too.”